In the city, trees play a particularly essential role in improving our quality of life. They provide solitude, screen unattractive constructions and activities, and soften the harsh lines of buildings. Trees can add a splash of color and contrast to the urban landscape. Because trees absorb CO2 and release O2 for us to breathe, having trees around ensures good air quality. They trap dust, smoke, and pollutants in their leaves, branches, and trunks, removing them from the atmosphere. A single hectare of beech woodland may remove 4 tonnes of dust from the sky each year. A mature tree produces enough oxygen for ten people per year.

Trees improve the environment and the landscape on their own, but they are also an important aspect of the ecosystem, supporting species and biodiversity. Older or veteran trees, as well as those in groups or forests, provide habitat for native ground flora like bluebells and animals like bats, red squirrels, and invertebrates.

While all trees provide benefits to humans, some have a longer history and are more beautiful than others. The trees we present to you today are those that have piqued people’s interest over the years.

List of 10 Most Mysterious and Wonderful Trees in the World: 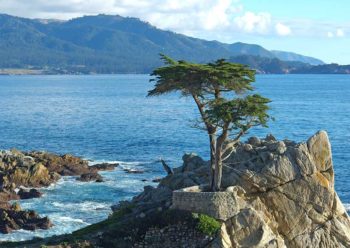 In Pebble Beach, California, the Lone Cypress is a Monterey cypress tree. The tree, which stands on a granite mountainside near the 17-Mile Drive, is a Western landmark and has been dubbed one of North America’s most photographed trees.
The tree is 250 years old and sits next to one of the most beautiful (and expensive) golf courses in the world. It’s a marketing tool, a trademark, and a Western icon all rolled into one. This tree represents the Monterey Peninsula in the same way that the pyramids represent Egypt and the Eiffel Tower represents Paris. It’s no surprise that its caretakers hope it will live another 100 years.

You can view the Lone Cypress and the stunning combination of land, sea, golf, and luxury that is Pebble Beach if you drive along 17-Mile Driver. However, you will not be able to get within 40 feet of the tree. 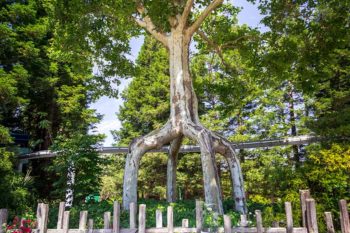 These trees are the result of Axel Erlandson’s pastime as a bean farmer. In 1947, he launched “The Tree Circus,” a horticultural attraction with the slogan “See the World’s Strangest Trees Here.”

In 1945, Erlandson’s daughter and his wife went to the beach near Santa Cruz, California, where they noticed people lining up to pay to see the Mystery Spot’s strange structures, such as tilted buildings. They later proposed that if Axel’s trees were on a well-traveled tourist route, they could be put on display and people could pay to see them. The Tree Circus, his roadside attraction, first launched in the spring of 1947.
Erlandson was extremely secretive, refusing to share his methods for growing the Circus Trees (he even grafted behind screens to keep spies out!) and carrying the secrets to his grave.

Millionaire Michael Bonfante later purchased the trees and moved them to his amusement park Bonfante Gardens in Gilroy in 1985.

General Sherman is a big sequoia (Sequoiadendron giganteum) tree in Tulare County, California, that can be found in the Giant Forest of Sequoia National Park. It is the world’s largest living single stem tree in terms of volume.
Naturalist James Wolverton, who served as a lieutenant in Sherman’s 9th Indiana Cavalry, named the tree after the American Civil War general William Tecumseh Sherman in 1879.

General Sherman is about 2,200 years old, and every year it adds enough wood to grow into a standard 60-foot tall tree. “The Big Tree is Nature’s woodland masterpiece, and so far as I know, the grandest of living things,” naturalist John Muir stated.
There has been a vigorous fight for the title of largest tree for nearly a century: in addition to General Sherman, there is also General Grant [wiki] at King’s Canyon National Park, which has a bigger circumference (107.5 feet / 32.77 m vs. Sherman’s 102.6 feet / 31.27 m). 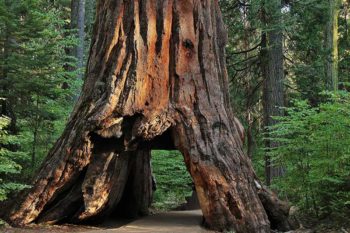 Scientists haven’t speculated on Hyperion’s exact location. They don’t want a stampede of tourists trampling the tree’s root structure because the terrain is challenging.
That’s not all the Coast Redwood has to offer: there are four massive California redwoods large enough to drive a car through!

The Chandelier Tree in Leggett, California is the most famous of the drive-through trees. It’s a 315-foot-tall redwood tree with a 6-foot-wide, 9-foot-tall hole drilled into its base in the 1930s. 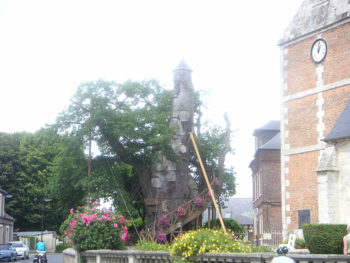 In Allouville-Bellefosse, Seine-Maritime, France, the Chêne chapelle is an oak tree. It’s more than just a tree: it’s also a structure and a sacred monument.

The age of the oak tree is estimated to be between 800 and 1,200 years. It stands 15 meters (49 feet) tall with a 16-meter circle at its base (52 ft). Its hollow trunk houses two chapels: Notre Dame de la Paix (“Our Lady of Peace”) and the Chambre de l’Ermite (“Hermit’s room”), both of which were built in 1669 and are still in use. The chapels are reached via a spiral stairway that wraps around the trunk.
In 1669, l’Abbe du Detroit and du Cerceau decided to construct a chapel in a 500-year-old or so oak (Quercus robur) tree that had been hollowed out by a lightning bolt. A tiny altar to the Virgin Mary was made by the priests. A second chapel and a staircase were later constructed.
Pieces of the tree are now dead, the crown is shrinking year by year, and protective oak shingles have been placed over parts of the tree’s bark that have fallen off owing to old age. The elderly tree is supported by poles and cables, and it may not live much longer. The Chapel-Oak of Allouville-Bellefosse, on the other hand, appears to be immortal as a symbol. 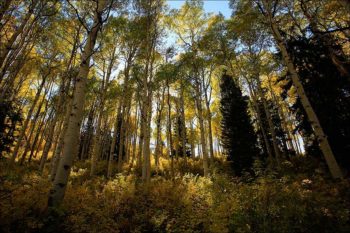 Pando, also known as the Trembling Giant, is a clonal colony of a single male quaking aspen that has been determined to be a single living organism according to identical genetic markers and is thought to have a single vast underground root system.

Pando, which means “I Spread” in Latin, is made up of around 47,000 stems spread across 107 acres of land. It is thought to weigh 6,600 tons, making it the biggest organism ever discovered. Although the individual stems are 130 years old on average, the overall organism is thought to be almost 80,000 years old!
Pando is assumed to have thrived for long of its existence in ideal conditions: numerous forest fires prevented conifers from colonizing the area, and a temperature shift from wet and humid to semi-arid prevented seedling establishment and the ensuing competition from younger aspens. 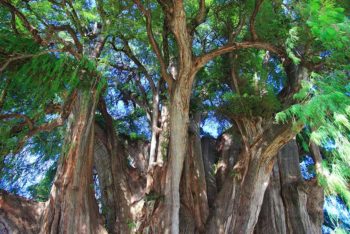 The Tule Tree is a tree on the church grounds in the town center of Santa Mara del Tule, Oaxaca, Mexico, about 9 kilometers (6 miles) east of the city of Oaxaca on the way to Mitla. The tree is a very huge Montezuma cypress, with a trunk girth of 190 feet (58 meters) and a trunk diameter of 37 meters (11.3 m). The Tule tree is so dense that it is said that you don’t embrace it; instead, it hugs you.
The age is unclear, with estimates ranging from 1,200 to 3,000 years and possibly 6,000 years; the best scientific estimate is 1,433-1,600 years based on growth rates. It was planted some 1,400 years ago by Pecocha, a priest of Ehecatl, the Aztec wind god, according to local folklore; its location on a sacred site (later taken over by the Roman Catholic Church) would further support this.
The tree’s roots have been damaged by water shortages, pollution, and traffic, with 8,000 automobiles traveling daily on a nearby highway, according to reports from 1990. 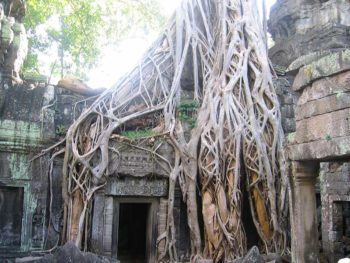 The Banyan tree gets its name from the “banians,” or Hindu traders who do business under it. You’d recognize a Banyan tree even if you’d never heard of it (it was the tree Robinson Crusoe used for his treehouse). The huge tree has a recognizable shape, with a towering canopy and aerial roots that flow from the branches to the earth. The Sri Maha Bodhi tree in Anuradhapura, Sri Lanka, is one of the most famous Banyan species, also known as the Sacred Fig or Bo tree. This tree is claimed to be where Siddhartha Gautama, the spiritual teacher who subsequently became known as Buddha, obtained enlightenment. It is the world’s oldest living human-planted tree, with a precise planting date of 288 BC. 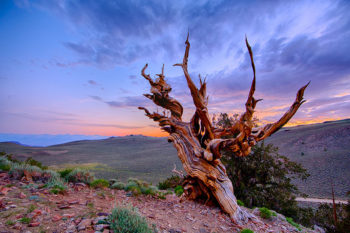 Methuselah is a 4,849-year-old Great Basin bristlecone pine tree that grows high in Inyo County, California’s White Mountains. It was thought to be the world’s oldest living non-clonal creature for many years until it was surpassed in 2012 by the finding of a 5,067-year-old bristlecone pine in the same area (germination in 3050 BC).

Then there’s Prometheus’ story. A Great Basin bristlecone pine (Pinus longaeva) tree living near the tree line on Wheeler Peak in eastern Nevada, United States, was the oldest known non-clonal organism. Prometheus, the mythological hero who stole fire from the gods and gave it to men, is referenced in the tree’s name. Donald Rusk Currey, the original researcher, gave it the number WPN-114, indicating that it was the 114th tree he sampled during his investigation in Nevada’s White Pine County.
Donald R. Currey, a PhD student at the time, was obtaining core samples from a tree named Prometheus in 1964. When his boring tool broke inside the tree, he sought the US Forest Service for permission to cut it down and inspect the entire cross section of the wood. The Forest Service, to my surprise, agreed! When they inspected the tree, they discovered that Prometheus was almost 5,000 years old, making it the world’s oldest tree at the time the scientist inadvertently killed it. 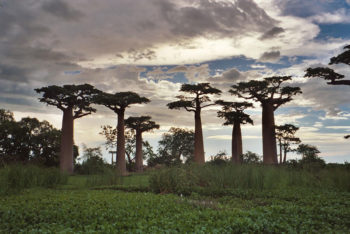 A baobab is any of nine deciduous tree species in the genus Adansonia that can be found in dry areas of Madagascar, continental Africa, Arabia, and Australia. A baobab tree, often known as a monkey bread tree, can reach heights of about 100 feet (30 meters) and widths of 35 feet (11 meters). Their distinctive feature is their swollen trunk, which serves as a water storage tank — the baobab tree can store up to 31,700 gallons (120,000 l) of water to withstand severe droughts.
Although Adansonia trees produce weak growth rings on a yearly basis, they are unreliable for aging specimens since they are difficult to count and may fade away as the wood ages. A few people have been identified using radiocarbon dating. Grootboom, a digitata, was dated and found to be at least 1275 years old, making it one of the oldest angiosperm trees known.

There are many more trees with interesting names, histories, and aesthetics. They do, however, have one thing in common: they are all hundreds of years old. Each of them will live to watch over our generations for decades. The presence of trees on this planet makes the environment more pleasant. As a result, in order to keep this world friendly and enjoyable, let us care for these legendary trees and begin planting new ones.